The new LVR rules, combined with Auckland's lack of affordability, are pushing money out of Auckland and into the regions. This ripple effect is highly predictable, given that Auckland is cycling ahead of the rest of the country (followed closely by Canterbury), as evidenced by the graph below. 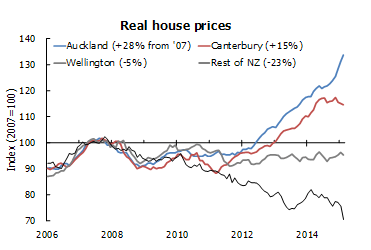 In relation to this graph showing Auckland versus the rest of the country,  I think it would be fair to say this can't go on – eventually the regions will catch up (due to the ripple effect).

I recently spent time in Tauranga, and feedback from the agents there is that 60% of auction attendees are Aucklanders - investors with cash seeking 80% leverage. This didn't surprise me. (Investors can only get 70% LVR in Auckland under the new rules, which come into force on November 1. I recently wrote a blog about these LVR rules, which you can read here.) I am also hearing similar anecdotal feedback from Hamilton.

The regions look attractive at the moment, with comparatively good buying and expected increases in values due to the ripple effect spreading out from Auckland. However, the question investors should be asking at this time is, 'What happens when we go into the next downturn?' How much of the increase in value do you get to keep and how much falls away due to the volatility of the local markets in the regions versus more robust markets?

What reduces volatility in a down market?
I cover this topic extensively in my book  Property 101. When the property cycle enters the downturn phase (which it inevitably does at some point), some places suffer less significant drops in value and recover faster than others, i.e. they are less volatile. The factors that reduce volatility are:

Obviously Auckland has the best fundamentals with its own self-propelling economy, diversified employment, high average incomes, high population growth and extremely tight supply/demand fundamentals. But is it heading to the top of the cycle?

If you ask me to guess the growth over the next 18 months, I'd say Auckland has another 10–20% upside left for capital growth by the end of 2016. At that point I expect the market to top out, and move to the downturn phase by the end of 2017.

Ask me what I think Tauranga, Hamilton and possibly Wellington will do in the next 12–18 months to the end of 2016, and I'd guess growth at 20–40%. Why? Because they are cycling behind Auckland and benefitting from the ripple effect and LVR rules.

What about other smaller centres?
I think smaller centres will likely benefit from the ripple effect and LVR changes too, but ask yourself which of these areas will crash in value when interest rates go up or the market moves into the down cycle. In my experience, rapid house price growth in areas with low incomes is more volatile and prone to crashing because, plainly speaking, the owners of property don't have the incomes to fund the interest required to pay for assets at inflating values, and tenants don't have the incomes to afford higher rents.

So the smaller centres tend to crash harder than the main centres that have better supply/demand fundamentals and higher incomes, where people have the money and the bulk of the immigrants go.

Summary
By all means chase the growth that is rippling out of Auckland – I thinks it's a great idea. But be aware that the financial hangover in small towns is much worse and lasts longer than in the areas with better fundamentals. I will repost my favourite graph to demonstrate this point.

Hi I received a copy of your Property 101 book as part of subscribing to the Property Investor magazine. Once I started reading I couldn’t put the book down. I have 4 investment properties (all based in Upper Hutt, Wellington) but never really understood the science of property investing. I am so much more informed now that I have read your book. After reading your book I will approach my next purchase differently and be a much more informed investor. The weblinks also provide great sources of information to follow up on and a property mentor will be someone I will definitely be seeking out. At the end of the book it included an offer for a discussion with GRA which I am keen to take up. Regards - GH - September 2015

My opinion on the new tax changes