Property investor compares investment returns
Tyson is a property investor, looking at investing in the Auckland market. He has been told by his parents that he should 'buy the worst house in the best area, and only invest where he would be comfortable with having his tenants over to dinner'. (I note that some people call Tyson's parents awful snobs and say they should get out in public a bit more often.) But personal bias and snobbery aside, do Tyson's parents make a valid point? Does the quality of an area and socio-economic status of the tenants dictate returns in the Auckland market?

Tyson decided to test the theory and look at the maths of the 10-year return on two specific suburbs, and make his investing decisions based on numbers, not old sayings and emotion. Tyson was interested that Otara, with its higher cash flow but similar capital growth, won the contest on total return. He wanted further convincing so looked at the five-year and two-year comparative growth rates to see if the shorter term trends were changing. This revealed as follows:

Otara is still standing up.

From an internal rate of return (IRR) perspective, selling at year 10, this is how it stacks up: 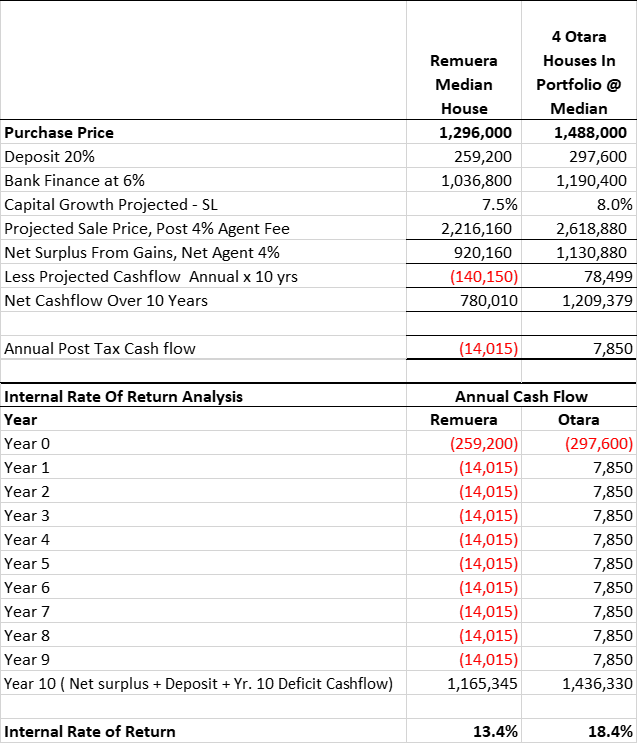 Comprehensively then, looking at the total return and IRR, Otara keeps up with Remuera's capital growth, but thrashes it when cash yield is added into the analysis.

Author notes & morals of the story

I am not saying, 'Here is a silver bullet, go buy in South Auckland for cash flow and high growth and this should be your only property strategy'. Far from it.  I'm simply pointing out to those that 'want to be able to have their tenants to dinner', that there are other places you can invest in Auckland, and do very well, possibly even better than in the perceived prime residential suburbs.

Thank you so much for your help!  I would like to make special mention of how impressed I am with the level of service GRA provided, start to finish.  You are all highly professional and helpful and you communicate instructions in a clear and concise manner which made it simple and stress free.  I also greatly appreciate that you were able to assist us within the limited time frame.

Announcing a New Partner at GRA

Insurance is a necessary part of mitigating risk – both for your properties and for yourself personally. GRA recommend these insurance providers. Contact them to find out more and to get no-obligation quotes.

Learn more and get an instant quote